If you’re in the market for a new curb ramp, you might be wondering what other people think of BRIDJIT curb ramps. To help you decide whether a BRIDJIT curb ramp would be a good fit for your driveway, we've rounded up a collection of some of the reviews we found on the web. 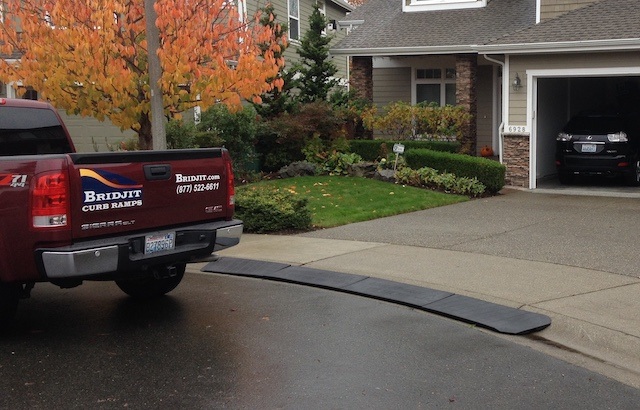 “No More Bottoming Out”

An Amazon user named Gigerina owns two cars with low ground clearance, and she took the time to leave a review on Amazon about her BRIDJIT curb ramp set. She says that the BRIDJIT curb ramp set she installed at the end of her driveway has made “entering and exiting [her] driveway much smoother and quieter."

Other reviewers echo her sentiments. Another Amazon reviewer wrote that a BRIDJIT curb ramp is a great product for lower cars, and it makes it easy for just about any car to drive up a curb. “Before I had [my BRIDJIT curb ramp], my MINI Cooper S would scrape every time [I drive over my rolled curb]. Now I can make it over the curb just fine.”

Homeowners keep raving about the way BRIDJIT curb ramps are more frequently accepted by cities and homeowner associations than some other ramps. Most cities are picky about curb ramps because some ramps interfere with the water flow. BRIDJIT specifically put a waterway at the bottom of their curb ramps, as well as angled ends, to allow water to flow underneath them.

Amazon reviewer and BRIDJIT curb ramp owner Ruth wrote, “We live in a pretty picky community, both from the HOA and the city inspectors. [A city inspector] drove by, stopped, looked at the ramps, smiled, and waved at my husband. [The inspector was] basically letting him know that [the ramps] were perfect within code.”

She went on to add that several of her neighbors grabbed the BRIDJIT web address to order ramps for their own driveways.

“Very Smooth Entry And Exit For Our Cars”

Another Amazon user named Cory M. agrees. In his review, he wrote, “[My BRIDJIT curb ramp] really smoothed out our driveway entrance so I don’t feel like I’ll need an alignment every 6 months.”

A customer at Griot’s Garage was told that he needed a permit from the city and about $2,000 to tear out the old rolled curb at the end of his driveway and put in a new concrete approach. He decided to install a set of BRIDJIT curb ramps instead.

“What a great deal,” he wrote. “No concrete, contractor, or city permit hassles…The best [money] I ever spent!”

Another reviewer at Griot’s Garage could not be happier with their investment. They wrote that:

They concluded their review with this statement: “Now our BMW M6 [can be] easily and safely parked in our garage – a real asset in the Pacific Northwest.”

If you’re looking for a practical solution for the rolled curb in front of your driveway, you can’t go wrong with BRIDJIT curb ramps. The many rave reviews all over the internet show that BRIDJIT is the general brand of choice for curb ramps.

Learn more about BRIDJIT curb ramps here to see why they’re worth the investment.