How To Protect And Maintain Your BRIDJIT Curb Ramps

If you’ve bought a set of BRIDJIT Curb Ramps, here are some tips and tricks you might find useful.

Periodically Clean Under Your Ramps

It might seem odd, but cleaning under your ramps every several months is a good idea. Your ramps accumulate dirt and debris underneath over time. Cleaning underneath your ramps every six months or so will improve the appearance of your ramp set, and it will also help them stay in place. Dirt and debris can sometimes act as a lubricant, reducing the traction between your ramps and your curb. This is especially true of sand or gravel, which can act like ball bearings if it’s between your ramp set and your curb.

Flip your BRIDJIT ramps up onto the sidewalk or onto the street to make curb cleaning easier.

To clean under your ramp set, grab a second person and flip it over onto the street or sidewalk. It’s easiest to flip the ramps by starting at one end rather than in the middle. Because all the ramp sections are  bolted together, when you flip one the other two will follow the first and flip over on their own. Then you can just hose down the underside of the ramps and rinse the gutter.

Are Your Ramps Shifting Left Or Right? Here’s How You Fix It

If your ramps have shifted to the left or the right and you need to reposition them, there are a couple of things you should know:

Also, if your ramps are shifting on a regular basis, and you’re taking care to cross them “head on,” it’s probably a good idea to clean underneath them.

Most plow drivers stay well away from the curb in order to avoid damaging it. A big steel snow plow can severely damage a concrete curb. But, sometimes plow drivers will get right down into the gutter. If they do, they may damage your BRIDJIT Curb Ramps.

An easy way to prevent this problem is to add flags to your ramps. One of our customers (Bill in Reno) shared some photos of his ramps with flags, which you can see below. 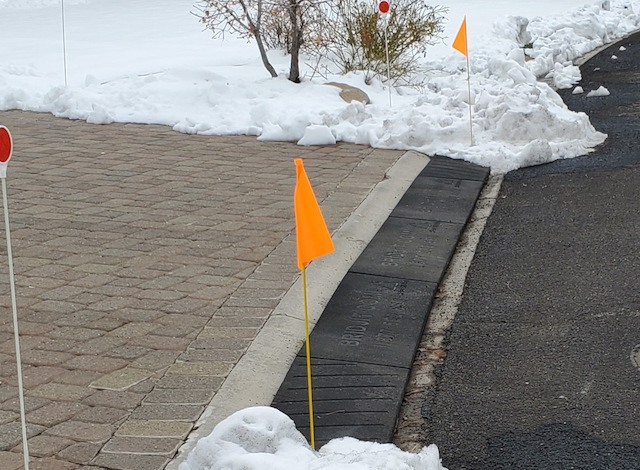 Bill drilled some holes into the ramps, inserted a set of snow stake flags, and now he doesn’t have to worry. *Please note: You’ll want to drill holes that are straight up and down into the ramp. Holes at an angle won’t work.

Theft Prevention Tip That A Lot Of People Overlook

Finally, there’s a step in the ramp installation instructions that a lot of our customers overlook. Crimp the first two threads of the bolts after the nuts have been installed with fingers, with ½ in of bolt sticking through the nut. Do not tighten the nuts on the bolt. his will make it hard to remove the nut, which will make it very hard for someone to steal your ramps. This also makes a good theft deterrent because it now weighs 153 pounds or more. That is not an easy lift. 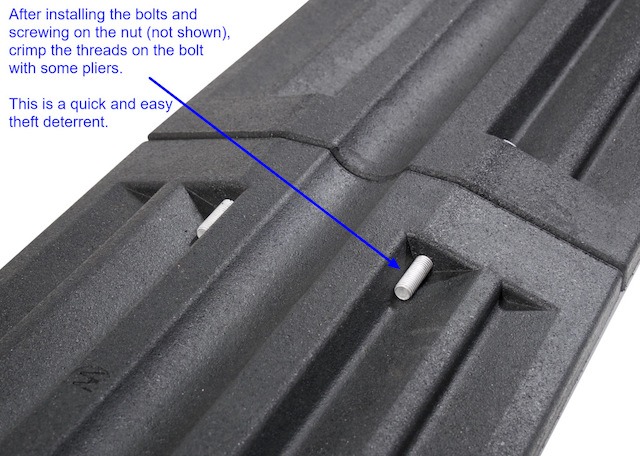 Crimp the bolts after the bolts are on. Makes a good theft deterrent.

NOTE: Ramp theft isn’t a big problem (our ramps are heavy), but we recommend this theft deterrent just in case. ( More about theft in this article.)

A very big thanks to all our BRIDJIT Curb Ramp customers!